Today, the Edmonton Writers’ Group will be in the Presentation Room of the Enterprise Square EPL Branch in downtown Edmonton from 1:00pm-5:00pm, selling and singing copies of our new anthology, ‘Edmonton: Unbound’.

‘Edmonton: Unbound’ contains fourteen stories by twelve local authors, unified only by the common theme of their current hometown, Edmonton, AB. Ranging from simple domestic interactions, to futuristic sci-fi adventures, to deep psychological introspections, these stories take a look at Edmonton from viewpoints as different as the writers themselves. This anthology is a love letter to our hometown, and demonstrates our incredibly varied approaches to literature, and to life.

As a gesture of our gratitude, all proceeds from the sales of this book will be donated to the Edmonton Public Library, which has been gracious enough to host our humble group at the Capilano branch for over a decade and a half. 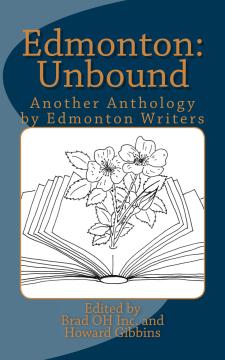 To celebrate this release, we have an interview with one of the ‘Edmonton: Unbound’ authors, Brian Clark.

Brian Clark: ‘Hunting Harley’ started almost 4 years ago with the words “dart player chic” I found scrolling through my file of ideas, tips & phrases that resonate.  It seemed to me that the phrase belonged in a romance so I started to write the “Jean” character as a girlfriend for the dart player guy.  The story evolved into a sort of soap opera structure weaving a romance, a crime and motor cycle workshop.  I floated the piece before members of the Edmonton Writers’ Group and it became clear that the story was too busy to be fully coherent.  The result was that I dropped the romance element, brought forward the crime story and used the workshop as a location where the characters interacted.

‘The Letter’ was written specifically for the Edmonton: Unbound project and came to me pretty much fully formed.  I had used the main character before in an unpublished story so she seemed like an old friend.  The full first draft was written in a single 75 minute sitting.  In a subsequent session, I added a couple of paragraphs near the middle and worked on the last paragraph.  A third outing added the historical research and all I had left to do was the line editing.

Brian Clark: Early in my working life, I wrote letters for a living but those were always under the tight editorial control of others.  When I retired, I developed an urge to say what I think.  I wrote for the newsletter of a non profit organisation for a while, but again the editorial guidelines felt restricting.  Thus I ended up writing fluffy fiction with, I hope, an underbelly of gentle social comment.

Brian Clark: This is an easy question.  By a long way, my biggest challenge is always getting my work into the format needed by the editors.  On a couple of occasions, I was thankful for the computer assistance of my daughter.

Brian Clark: Being older, the people in my life, my friends tend to also be seniors so I think that contributes to my attraction to mature characters.  All my adult life I have listened to Bruce Springsteen and I love the way he writes tight characters and stories and leaves the listener to draw their own conclusions about the underlying social conditions.  I aspire to do something similar.

After my workout at the YMCA, I usually hang out in the locker room and drink coffee with other retirees.  I enjoy hearing their stories about their lives and frustrations.  I am sure some those help provide colour to my stories.

Brian Clark: I am fairly disciplined when writing characters and I am becoming more so when describing settings.  With plots, I take a much more free-form approach.  I have around a dozen part written stories and perhaps as many as a hundred orphan paragraphs that may or may not end up in a finished work.

Why I write this way is a more difficult question.  When I was a child I wanted to eat my dessert first because that’s what I enjoyed the most.  With writing, I am able to indulge myself and write the bits that come easily to me.  I take the view that every first draft, every fragment is perfect because its only purpose is to exist.  Once I have something written down I can and do change it or ignore it.

Brian Clark’s stories, “The Letter” and “Hunting Harley”, are featured in ‘Edmonton: Unbound’, which you can purchase now on Amazon.