In this episode of The Gentleman Juggalo, Brad and Scott discuss the second half of the sixth Joker’s Card, The Wraith’s exhibit of Hell’s Pit. They discuss a return to ‘insanity’, what makes ICP work for Scott, and request input from listeners about what they’d like to hear going forward.

In this episode of The Gentleman Juggalo, Brad and Scott discuss the first half of the sixth Joker’s Card- The Wraith’s exhibit of Shangri-la. They discuss Brad’s first Gathering, why Scott isn’t a Juggalo, and ask listeners for their stories about hearing The Wraith for the first time.

In this episode of The Gentleman Juggalo, Brad and Scott explore the fifth Joker’s Card, The Amazing Jeckel Brothers. They discuss the ongoing Joker’s Card saga and speculate on what’s to come, while Brad talks about how he got into ICP, and Scott explains why 1999 was the downfall of humanity.

In this episode of The Gentleman Juggalo, Brad and Scott listen to fourth Joker’s Card, The Great Milenko. They explore the impact of signing with Disney, demonic visitations, and a key turning point in the Dark Carnival mythology.

In this episode of The Gentleman Juggalo, Brad and Scott explore the third Joker’s Card, the Riddle Box. They say farewell to the old ways, describe Brad’s favourite scar, and discuss a potential death on a boat.

In case you’ve missed it, the Gentleman Juggalo Podcast has been up and running for several weeks now, and just released its fourth episode, ‘The Ringmaster’.

In this episode of The Gentleman Juggalo, Brad and Scott explore the second Joker’s Card, The Ringmaster. They explore the developing sound of the Wicked Clowns, possible influences, and the quickly improving production quality.

Today, I’m happy to share several exciting bits of news. First off, the long-anticipated debut of ‘The Gentleman Juggalo’ Podcast is finally here! The first episode is now live, and subsequent episodes should be arriving every second week.

In ‘The Gentleman Juggalo’, a long time, down for life Juggalo named Brad (that’s me) guides his amateur friend Bo through the mysterious world of the Insane Clown Posse and their Dark Carnival.
With breakdowns of lyrics, backstories, and personal insights, together they explore the band’s evolution. But is Bo ready to get serious about ICP?

That’s not all. This month, I’ve been working on several short stories, which are now done and submitted to a range of magazines and competitions—so look forward to more news about them in the near future.

Now, I’m getting back to working on my current novels—it’s always great to write something new, but returning to the novels is also a real treat.

Finally, today I’ll leave you with an awesome new review for ‘Edgar’s Worst Sunday’, shared on Goodreads by our friend from Stranger Tales, ‘Ninja’ Nate Andren!

This slim, beautifully designed novel is anything but a light and fluffy page turning beach read. And thank heaven. Rather, like a fine liquor I’ve savored this deep character study over time, taking Edgar with me both in book form and as poignant allegory.
An apt comparison to Scrooge’s ghostly dream has been made, though Edgar’s journey begins far after any chance to change the shadows shown him. No, this devilishly clever tale by Edmonton’s own Brad OH leads the reader on a booze-fueled cigarette countdown to the inevitable empty pack. Good intentions may lead nowhere nice, but lack of awareness deeper than the surface illusion of self is a truly hellish hall of mirrors. It is precisely the author’s deeper awareness that underpins this deceptively hedonistic decent into the void.
Smoke ’em if ya got ’em, but know that time is a cruel mistress. Pick up a copy today, and the next time you indulge please remember to pour one out for our dead homie, Edgar.
[Other highly entertaining and highly recommended creative endeavors featuring Brad OH include podcasts Tell Me A Story, and The Gentleman Juggalo]

On Friday, Jan. 31st, Scott and I released the final Episode of ‘Tell Me a Story with Bo and the Juggalo’. This episode featured a great discussion of the game which aptly calls itself the “end to boredom”, ‘Morton’s List’.

Coming sooner than you think…

While this was a great closer to one fun project, I’m happy to share that like the old saying goes, every ending is also a beginning. Starting on Wednesday, Feb. 19th, we’ll be releasing the first episode of ‘The Gentleman Juggalo Podcast’. Stay tuned for more information coming soon.

It’s been a minute since we’ve posted anything under our ‘Gentleman Juggalo’ category, but have no fear! We here at Brad OH Inc. will never forget the Juggalo family, and we have some exciting things coming your way soon.

Some of you may have noticed that my former podcast, ‘Tell Me a Story- With Bo and the Juggalo’ has wrapped up, but I’m happy to announce that it’s only stepped out of the way for something bigger and far more fresh.

That’s right, coming soon you can hear The Gentleman Juggalo Podcast. We’ll explore the early years of ICP, and try to get in depth with some of their career moves, artistic choices, and underlying meanings as I take a non-Juggalo newbie (Bo) through the mysterious world of the Dark Carnival!

Do you have any specific requests? Things you’ve always wondered, or ideas you’d like another opinion on? Is there a particular song you think Bo should listen to—strapped down Clockwork Orange style? Let us know in the comments below, or by clicking here.

Until then, stay tuned to Brad OH Inc. for more news on when you can hear new episodes of The Gentleman Juggalo Podcast!

Last week, we reviewed ‘Fearless Fred Fury’, the fourth Joker’s Card of the Second Deck by the Insane Clown Posse. This week, we are exploring its companion EP, ‘Flip the Rat’.

Flip feeds off the fear instilled by Red Fred, and opens with a series of songs describing Fred’s character, and the destructive power of violent fury. These were perhaps attempts at album openers, eventually replaced by ‘Red Fred’ and ‘Fury’ as the Joker’s Card’s introductory songs.

They feature varied and interesting rap-styles, and one of the biggest disappointments of either album is that ‘Revenge’ was not a 6-minute song.

The middle section of the album features many of the ICP standards one might expect on a Joker’s Card—sex songs, shit-talking songs, and guest features.

‘Friend Request’ depicts terrible people reaching out for connection, putting a comical spin on the darker aspects of our world before calling these into a clearer focus and calling them out directly.

The fact that these standards appear on Flip is an obvious result of the more focussed nature of Fearless Fred Fury in both sound and tone. 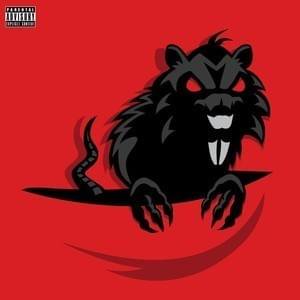 Moving into the final third of this impressively lengthy EP, ICP deliver some long and very interesting songs, exploring new territory and key connections to the main album alike.

‘Hawking’ in particular is an fascinating piece. Covering every imaginable conspiracy theory about controlling groups and lack of hope—this song takes the idea behind FFF’s ‘Satellite’ and Flips it on its head. The songs compliment each other well, showing us that when looking at the big picture, the lens makes all the difference. While ‘Satellite’ looks at the wonder of being alive and gives a sense of unlimited potential, ‘Hawking’ looks at the paralyzing fear of feeling out of control and victimized.

‘Tha Dogg’ is a gritty rocker of a song, telling the story of an abused child growing up to seek violent revenge on his parents, and anyone else in his way.

Either of these two songs may have found a place on the main album—perfectly capturing the precipitous balance between taking actions to change your life, and losing yourself to violence and self-loathing.

The EP closes with ‘Be Safe’, a love song to Juggalos and to each other. It’s an anthemic ode to friendship, love, and togetherness, stressing the importance of key connections in life, and driving home the wisdom of eschewing the dangers and violence depicted throughout the preceding albums.

In a particularly moving moment, J gives a shout out to Cannibal, a Juggalo who died in 2015 defending a mother and her infant child from a violent mugger.

It’s a testament to the beauty of life, and all the things that can keep us from the self-loathing and desperation the rest of the albums take aim at. It’s a fitting ending to the series, and show the importance both of Flip the Rat as a balancing companion to Fearless Fred Fury, as well as the import of the decision to close FFF with ‘I Like it Rough’ rather than ‘Be Safe’.

Taken as a whole, ‘Fearless Fred Fury’ and ‘Flip the Rat’ cover a lot of ground, and work in tandem to present a compelling perspective on self-efficacy and empowerment, contrasted with the desperate, violent, and loathsome results of a failure to appreciate them.

It’s a powerful Joker’s Card and EP combo, and heralds a thrilling era that brings back much of the anger and hard-hitting tracks that some Juggalos have felt were lacking on previous albums. It goes all-in, and gets pretty dark at times, but as is the case with most Joker’s Cards, it has a crucial thread of positivity and appreciation sewn throughout for those who care to search.